Types Of Stinging Insects In Maine

Pine State Pest Solutions received an average rating of 4.6 out of 5 stars from 71 reviews. 4.6 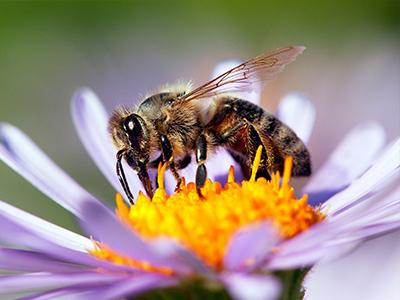 The Maine state insect since 1975, honey bees are vital to our state’s agricultural economy. As essential pollinators, honey bees aid in the pollination of crops, trees, and grasses. Really, these types of bees play a crucial role in the production of the entire world’s food. In fact, on their website The Bee Conservancy states that honey bees are responsible for 1 in 3 bites of food.

If you’ve ever been stung by a honey bee, you probably don’t look too favorably on these social insects. And we get why; honey bees stings hurt. What’s more, they can be life threatening to individuals who are sensitive or allergic to their stings.  Symptoms to note include:

According to the Mayo Clinic, people who experience a severe allergic reaction to a bee sting have a 25% to 65% chance of anaphylaxis the next time they’re stung. In that case, the individual must seek medical treatment right away.

While the bee sting stats above do not exactly endear them to anyone’s hearts, we cannot categorize them as enemies either. A healthy respect for honey bees is the attitude to adopt and the good news about them is that they usually only sting in self-defense. If you keep your distance, they won’t purposely or aggressively come at you.

Commonly found in gardens, woodlands, orchards and meadows, you may also find honey bees or honey bee nests (not bee hives as these are man-made structures) on your property in areas such as:

If you discover a honey bee nest on your home or in close proximity to it or areas where your family is likely to spend time, we highly recommend contacting a professional beekeeper to help remove and preserve the nest. 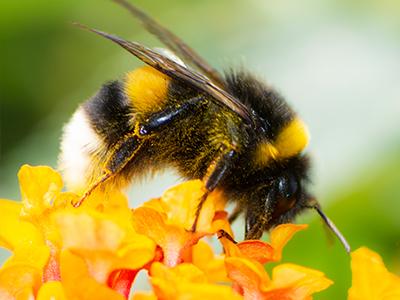 Bumble bees are another group of stinging insects that live in nests with others. They are often confused with honey bees but they are fuzzier and their nests are smaller because they hold only a few hundred individuals compared to the thousands of members that live in a honey bee nest.

Bumble bees are also considered important pollinators in the U.S. and play a vital role in the production of crops and wild flowers. Bumble bees are also stinging insects. Unlike honey bees who can only sting once, bumble bees can sting multiple times because their stingers don’t have a barb that sticks inside of their victims. The good news is that these pests are not as aggressive and their stings are not usually as painful. Still, they can prove harmful to individuals who are allergic to them. Symptoms of an allergic reaction to a bumble bee sting include:

An allergic person could also experience a respiratory system issue such as tightness in the chest, a tickle in the throat with a cough, and difficulty breathing (possibly accompanied by a squeezed feeling in the throat) as well as other very serious symptoms.

According to the University of Maine, there are several species of bumble bees in Maine and while some build nests in abandoned rodent holes, cavities of rock walls, foundations, and other areas where they feel sheltered, others may nest higher up in abandoned bird nests or even inside in insulation of walls. 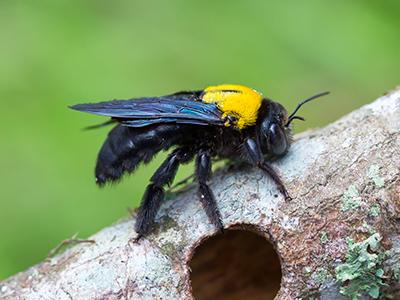 Whereas honey bees are social insects that live together in large family groups, carpenter bees in Maine are solitary creatures. Carpenter bees differ from honey bees in other ways as well – namely, they are not as important of a pollinator as the latter nor do they have the reputation for stinging like honey bees do. While female carpenter bees can sting, they rarely do unless threatened. Male carpenter bees do not have the ability sting and so to dissuade you from coming close they will attempt to intimidate by hovering around you.

What makes carpenter bees a pest here in Maine, is their ability to damage unpainted or un-treated wood on decks and homes. As a real-life carpenter does, these bees similarly work with wood. By working with wood, we mean fertilized female carpenter bees will drill holes in wood in order to create tunnels where they lay their eggs. Though not nearly as destructive as carpenter ants, these bees can do a pretty good job damaging a structure. And if that isn’t enough, the woodpeckers that are attracted to carpenter bee larvae will cause further damage. 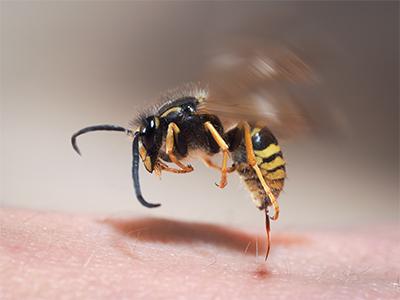 Perhaps the most infamous of wasps, yellow jackets in Maine are social insects that move pollen around from flower to flower as they search look for food. Their part in the pollination of crops is not nearly as significant as honey bees but they are helpful in insect control (they feed insects to their larvae).

Very aggressive wasps, yellow jackets are not afraid to come at you stinging if you pose a threat. Unfortunately, yellow jackets have the ability to sting multiple times and their stings can be painful. For those allergic to their stings, there is an increased risk of anaphylaxis.

Yellow jackets nest up high, down low and everywhere in between. Common nesting sites include, but are not limited: 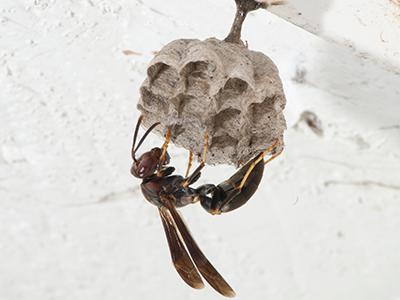 Paper wasps are another common type of stinging insect in Maine and the species who aids in pollination and also feeds on and controls other insects and insect larvae around them.

Despite their helpfulness, paper wasps are not a pest you want in or near your home much less in close proximity to your family. Their stings range from mild to quite painful and those who are allergic to their venom may experience serious reactions. What’s more, paper wasps can sting several times.

Paper wasps nest both indoors and out. Inside, you may find a nest in the attic, in wall voids, and in door frames. Outside, it is not uncommon to find them nesting the eaves of a house or near window sills. A good rule of thumb – if you see a bunch of these wasps in a specific area, there’s likely to be a nest in that spot or close by. 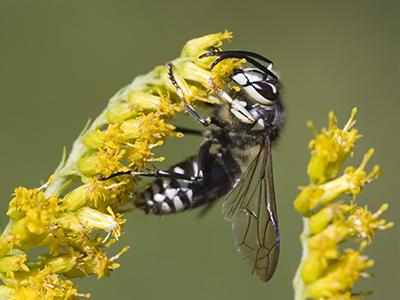 You may be thinking we’ve classified bald-faced hornet incorrectly and that they are not actually wasps but it’s true, they are in fact a type of wasp in Maine. These black and white colored wasps are social insects that live in nests by the hundreds. They are pollinators and because they prey on other insects, are a form of natural pest control.

Bald-faced hornets can be quite aggressive and have a tendency to attack if you get too close to their nest. Altercations with angry bald-faced hornets may leave a person covered in multiple stings as they are capable of stinging multiple times.

Bald-faced hornets build paper-like nests that are suspended from trees, bushes, and buildings. 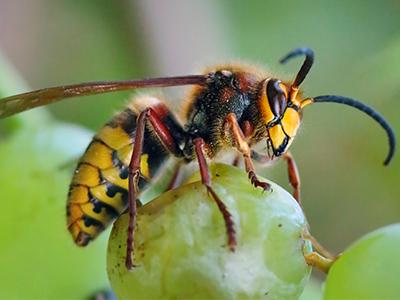 Another stinging insect whose name may cause confusion, European hornets are very large wasps that pollinate flowers and that prey on spiders and insects.

Like other wasps, European hornets are capable of stinging over and over again and while some individuals may experience pain, itching, or swelling, these stings produce severe allergic reactions in individuals who sensitive to stings.

Nesting habits of European hornets are also similar to their relatives. Their nests are often found in places such as:

When are stinging insects active in Maine?

While there are several pests to worry about during the long, cold Maine winter, stinging insects are not usually on the list. They are, however, active the rest of the year. In the spring, you’ll see stinging insect activity increase as they emerge and start building new nests. They’ll spend the summer growing and rapidly expanding their numbers and as late summer and fall pass, you’ll see them focused on finding food as their natural sources are dwindling down. It is about this time, when you may find yourself running into these pests more and more frequently.

How to get rid of stinging insects

If you’ve discovered bees or wasps on or in your home and you’d like help resolving the problem, please contact Pine State Pest Solutions. While we do not treat for honey bees (a beekeeper will remedy the situation without harm to these beneficial bees), we do offer relief for other stinging insects in Portland, Lewiston, Augusta, and communities throughout our Maine Service area

Our year-round home pest control plans not only protect homes from ants, spiders, and other common house-infesting pests, it covers stinging insects that make nests in or on the house.

Why Cockroaches In Maine Love Bathrooms

4 Life Hacks To Keep Pests Out This Winter

Have you noticed there are life hacks for just about anything you can think of these days? For example, strategic planning is all you need to hack your hydration and according to Amazon, sponge spa…

How To Enjoy A Pest-Free Holiday Season

Are you looking forward to the holidays? There’s so much to do – from decorating your home to making gingerbread houses with the kids, from baking sweet treats to share with coworkers, neighbors,…