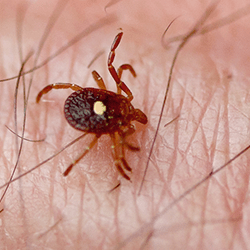 Maine is known as being the “Pine Tree State” because of the large number of wooded areas and pine trees that are found here. While they are beautiful and beneficial, the plentiful wooded and rural areas found in Maine allow tick populations to thrive. In fact, if you live in Maine, one of your first memories may be your parents checking you for ticks after coming inside from playing outside! In our area, residents are constantly on the lookout for deer ticks and are vigilant in protecting themselves, their kids, and their pets from coming into contact with them. Deer ticks carry and transmit a variety of diseases, including Lyme disease. In Maine, we also have populations of brown dog ticks. Although they’re not native Maine, these ticks are often introduced to certain areas of our state, especially areas around campsites, by visiting dogs. Deer ticks and brown dog ticks are not the only ticks you need to be on the lookout for, however; recently, it has been discovered that there is a new species of tick that Maine residents need to educate themselves about and protect themselves from - the lone star tick!

The lone star tick is usually found living in the more southern states, but they have found their way to Maine; these ticks travel to Maine on migrating songbirds. In the past, it was believed that our winters were too cold for these southern ticks to survive, but this may no longer be the case. It is believed that small populations of lone star ticks may have become established in Southern Maine. Lone star ticks are commonly identified by a bright white spot on their backs. These ticks do not like living in areas of direct sunlight, meaning that they are often found living in shaded, wooded areas; the shaded wooded areas that are found in plentiful numbers throughout the Pine Tree State make a perfect home for these lone star ticks!

The good news when it comes to lone star ticks is that, unlike deer ticks, they are not known to transmit any infectious diseases; the bad news, however, is that these ticks cause an allergy to red meat called Alpha-Gal. According to Dr. Marguerite Pennoyer, an allergist in Scarborough, ME, patients that have been bitten by a lone star tick may “start to feel that their throat is closing, they may feel weak, lightheaded and often may get nausea, vomiting, respiratory symptoms." Unlike the painless bite of a deer tick, bites from lone star ticks can be quite painful. In addition to the health concerns that lone star ticks pose, these ticks are typically found living together in very high numbers, making them difficult to control.

The best way to protect yourself, your family, and your pets from lone star ticks is to be aware of their presence in Maine and to be on the lookout for them. At Pine State Pest, we can help to control tick populations on Maine properties by providing ongoing outdoor tick control services throughout their entire active season, which is April through October. To learn more about the lone star tick or our highly-effective tick control services, give us a call today at Pine State Pest!